January 22, 2013 geogebraph GeoGebra Applets
Move the Size slider to change the size of the cross and move the slider

to the extreme right to transform the figure.
The applet above is an example of a dissection puzzle. A dissection puzzle, also called a transformation puzzle tiling puzzle where a set of pieces can be assembled in different ways to produce two or more distinct geometric shapes (Wikipedia).
The cross to isosceles triangle dissection puzzle above was created by Henry Dudeney in 1897.
Leave a comment

1. Draw a circle and draw a point in its interior.
2. Mark a point anywhere on the circle.
3. Fold such that the two points coincide and crease well.
4. Repeat steps 2-3 as many times as you can.

What do you observer about the creases?Note: The green lines represents the folds on the circle.

January 11, 2013 geogebraph GeoGebra Tutorials
A cardioid is a curve formed by moving circles. One of the ways to form a cardioid is shown below. In the applet (move the slider to the extreme right), the cardioid is given as the envelope of circles whose centers lie on a given circle and which pass through a fixed point on the given circle.
Step by Step Instruction in Constructing the Applet Above

January 3, 2013 geogebraph GeoGebra Tutorials
In GeoGebra, we use the Angle tool to reveal angle measures.  By default, an angle can measure  up to 360°; however, there are instances that we want it to be less than or equal to 180°.  For example, we need to limit the angle measures of the interior angles of a polygon to 180° if we want to find its angle sum.

In this tutorial, we learn how to disable angles measuring more than 180° but less than 360°.  Such angles are called reflex angles.  To disable reflex angles, do the following:
1. Right click the angle measure (green sector) and click Object Properties to display the Preferences window. 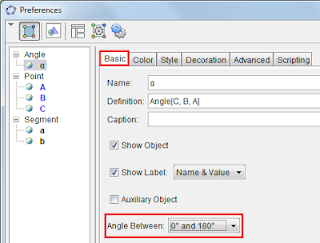 2. In the Preferenceswindow, click the Basic tab.
3. Select 0° and 180° in the Angle Between dialog box and then close the window.
Leave a comment